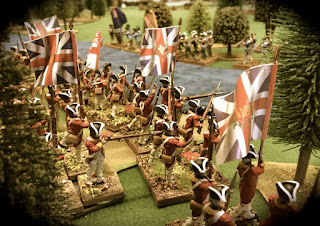 Our slow paced AWI campaign continued once again. This time the fight was small advance guard confrontation up in Vermont. Advance guard of Continentals was sent forward to gather stragglers and protect their retreat from British hands. The engagement was fought by the river. Rebel force was facing truly superior British infantry, light infantry and grenadiers, elite in many ways.

The battlefield was dense forest and only the Monument Hill was barren. Forest gave proper cover but was hindering the movement throughout the fight. Not at all typical Black Powder fight but quite typical during AWI.

The fight stalled for some time and troops from both sides of the river concentrated on intensive shootout. The the British general decided to attack. Left flank of British troops assaulted across but strong right wing didn't got commands clear and stayed put. British left flank started close fighting with Continental regiments but wasn't able to mount strong assaults. So brave Continentals repelled many assaults of British grenadiers. At the same time one Continental general was frantically gathering stragglers and ushered them away back to their regiments.

The last phase on the fight was when finally British right wing managed to cross the river. At the same time the Continental general somehow got distracted from the objectives, which was to bring his men safe and kept on futile fight against  overwhelming British troops. The poor stragglers were saved, but the Continental advance force was lost in result. Yes, Crown troops won.
Really interesting scenario and good hard fight. British were absolutely elite all the way. But Continentals took advantage from the terrain and were able top put up solid fight. Fun game, truly.