Bolt Action - Through the killing field 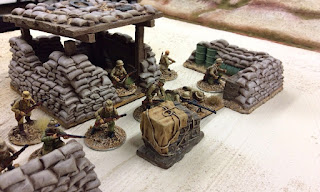 Bolt Action once again in the club. This time we went back to North Africa and played scenario 7 from the very good campaign book "Duel in the Sun".  Scenario is depicting opening stage of El Alamein battle when poor British infantry is to attack German positions across open field. No tanks available since they can't operate on densely mined area. Only positive side of that attack is cover of the African night. Mission was to take three German defended positions.

This was first time we had a game over our new desert table we've been tinkering some weeks. New table saw it's first fight and how bloody it turned to be. 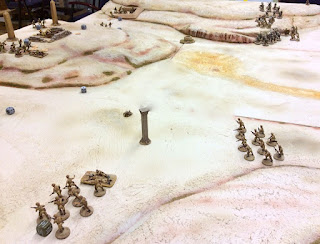 Starting from this set up five squads of Commonwealth infantry started approaching to German defenses after quite heavy preliminary bombardment. Troops moved fast over easy terrain trying to seek all possible cover from scenery but it was truly hard. In practice attacker was running over an open field. German were trying to recover from massive artillery strike and quite successfully. There were no battle action during early stages, only British troopers gripping their guns and running hearts pounding towards German line.

British platoon leader decided to attack from both flanks in order to deal German flanking positions first and then take care the At gun position n the centre of the line. Sikhs and SAS troopers were going right and Desert Rats went left. When they reached seeing distance the fire was opened almost mutually and murdering fire felled Desert Rats quite soon. Then they were finalized ferocious attack by the Germans. Sikhs fared bit better and almost cleared positions from right. But in the end there weren't enough attackers nor time to accomplish the mission and poor footsloggers were gunned down on desert sand. Germans suffered very heavy losses too, but held their positions.

Good game but very hard scenario to win for the attacker. It seems quite desperate to attack on defended positions with even force. Night fighting was once again nice add on. Still I like the scenarios of this "Duel in the Sun" campaign book scenarios, good games with nice historical touch.
Lähettänyt Juha klo 5.24