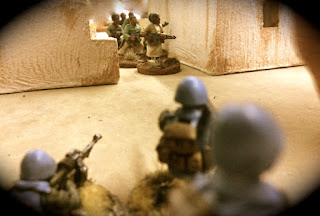 Our Kharum -campaign continued with a game where UN troops were retrieving two western engineers from obvious trouble. And what a show those blue clad boys put up after so many humiliating defeats.

This time the game was a classic scenario from the FoF rulebook, "Contracting Trouble!. It is quite straightforward rescue scenario with fairly small troops. Its is simple but it provides a good basis for a great game. And it didn't failed this time either.

The story was two engineers, mining they said, stuck in a hostile part of town because their car had failed them. Yes, once again, but this is almost everyday problem in harsh streets of Kharum. The engineers reported the situation and UN troops nearby responded. The area was known to be Colonel Miracles supporters so UN troops decided not to draw too much attention and approached location by foot and left jeeps behind. At the same time local militia leaders were having a meeting near the place where the broken car and poor engineers were waiting for. And naturally the militia troops were there too, so the place was crawling armed men. 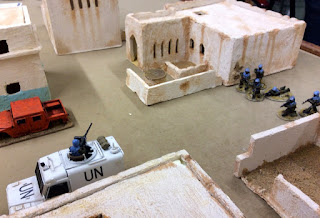 Few moments after the UN troops had started advance they spotted potential threat and first fire fight broke out. At the same time one of the UN jeeps zoomed along the road passing surprised Un troopers and even more surprised militiamen. Jeep rushed in front gunning down a gunman toting RPG in the corner. This fired up the scene. One Un unit took an overwatch position and jeep zoomed ahead towards two engineers. Local militia was still bit slow to react, maybe the lack of leaders was making them reluctant to engage UN troopers. At the same time the other team of UN troopers took advantage of the phlegmatic behavior of militia and performed clever flanking move towards the rescue point. Gradually one militia group after the another engaged UN troops but surprisingly effective overwatch fire and good tactical moves most of the opposition was neutralized. The alerted leaders were trying to run to their own troops but ended up shot by the UN fire team watching over the street. 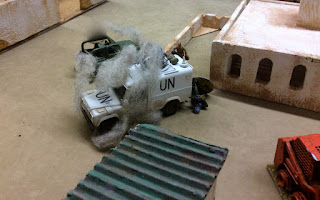 UN jeep reached the engineers and was burst in flames after detonating mine or IED. Crew survived
and took two engineers in protection. They started moving to flanking UN team while overwatch team on the street took care almost all fighting and very successfully I'd say. Even more militia poured in and surrounded the team on the street.They had clear plans to jump to UN troopers and take them as prisoners. But the most heroic street team kept the spirit up and while taking some casualties eliminated the attacks to their position and arrested two militiamen, to ad the insult. At this situation UN sergeant decided not to try the push towards safe zone, it was too risky. UN troopers occupied small house and set defensive positions there. Local militia tried one more strike but once again prepared UN troopers were better. There was once again an incident where four masked fighters appeared from nowhere shot down group of militia and went on before anyone really noticed. Everyone was wondering who these ghosts are? This operation ended on nice stalemate where four partly wounded UN group have took positions on three houses surrounded by bunch of very hostile militia. Good point to have another operation.

Some AAR shots from the scene:

Very good game. Fun and eventful with many turns of initiative. Some truly movie moments in the fight. Next will be "the Alamo".