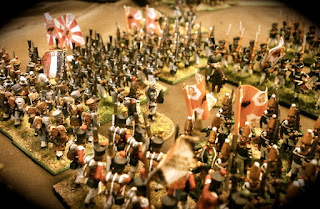 Our long Napoleonic 1812 campaign continued with the battle of First Polotsk. The battle was in northern front and fight was about preventing French army to break through towards St.Petersburg.

Nice game with quite sizable armies on each side. Historically in this fight French army was way larger, but it was split in two by the Dvina river. So actually Russian were more numerous and they were also attacking since their leader General Wittgenstein decided to take advantage of split force situation of the French.

A friend and fellow gamer published good account of the fight in his blog, Napoleon Complex Gaming, so you can read it there.

Here's some shots from the battle.