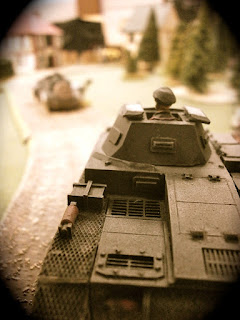 Occupation of France continued as we went back to Blitzkrieg games we started a while ago with my Club friend. The scenario was devised by him and it was quite simple and straightforward, but extremely good game where Germans were to take village and neutralize French defenders in process. Germans had slightly more troops, as attacker should. Bot sides had a tank, those nice early war things that get you smiling. Germans had also armored car for support. At the beginning of the game French deployed in the houses at the village, so the would hard to take. Germans started by moving in and advancing.

The village was done with brand new model houses from 4Ground that one of our established Club member had purchased to be used on Bolt games. The houses were absolutely great, they added a lot to look and feel of the game.

The fight started Germans infantry advancing in two groups from left flank and in the centre. From right flank came German armor driving along the road in a column led by the armored car. French were lurking in the houses readying their weapons and French tank rolled to meet Germans to left. At first the fight was only Germans advancing and French taking pot shots at them once in a while, but nothing dramatically happened. Germans piled up behind a hedge in a centre and on the left German squads pushed forward taking some casualties during advance. Then the actual fight started and it was all chaos. Germans managed to hit French howitzer and neutralize its grew with some good hits from tank and mortar. On the other hand German squad was slaughtered by french infantry fire when it was trying to move for
attack. French AT rifle sneaked around German tank and took a hit to German tank from behind and destroyed it with one shot.  At the high point of the fight French platoon leader sent two of his squads running from on of the houses after it was hit by the mortar. Only problem was that those squads came 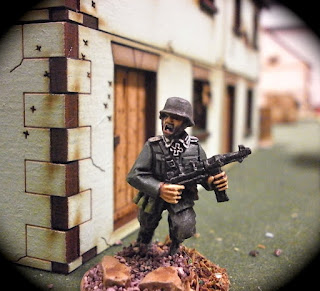 under heavy German infantry fire from behind the hedge. And after that they were attacked by German soldiers and killed in close range combat. But in return German squads were shot to pieces by French from nearby house and by tank. The fight was nearing the end and Germans had emptied from two out three houses, but their force was very depleted. So German platoon leader ordered all remaining troopers to assault last French strongpoint. In horror captain looked his me fall when they were trying take the house and when there were no more troopers left he decided to attack himself. He ran to house and sprayed last defenders with his machine pistol and took the last house. The fight went to Germans, but at what cost. The casualties were horrendous on both sides almost all French defenders were killed as well as Germans. The fight was over and the lone German captain for sure showed that the Iron Cross the model is carrying was given for a reason.

Some AAR shots.
Absolutely great game! The advantage turned from one side to the other from turn to turn. Great heroic feats were made and some amazing lucky shots and epic last assault of the captain, the man with the Iron Cross. This was Bolt Action at it's best.
Lähettänyt Juha klo 9.13